In today’s highly interconnected world, crisis management has become one of the top priorities for companies. The internet and social media ensure that news about any major organizational crisis spreads like wildfire. While some organizations are adopting new-age methods to face the impending crisis, others may not be as well-equipped. PwC’s Global Crisis Survey 2019 comes at a crucial time when businesses are struggling to adapt to the changing face of crisis management.

In its first-ever Global Crisis Survey, PricewaterhouseCoopers features insights from over 2,000 companies across 25 industries and 43 countries. Released in June 2019, the report contains a detailed analysis of more than 4,500 crises. The findings provide some noteworthy takeaways that can help organizations develop an effective crisis management strategy. They also discuss how certain companies have emerged stronger in the face of a crisis.

What is a Crisis?

The report defines a crisis as an event that has the potential to disrupt the normal operation of a company. It is likely to have an enterprise-wide impact and damage the organization’s reputation. It can be triggered by the escalation of one major internal/external factor or a series of smaller mishaps.

1. Crisis is the New Norm

One of the key findings of the survey is that no organization, big or small, is immune to crisis. 7 out of 10 respondents claimed to have faced at least one corporate crisis in the last 5 years. 7% of the respondents have witnessed more than 5 crises, with the average number of crises experienced being 3. Interestingly, companies with over 5,000 employees have been more susceptible to crises in the last 5 years.

Moreover, 95% of the respondents, even those who haven’t been hit by a crisis, expect to face one in the future. This could be attributed to increased awareness among top-level executives about what constitutes a crisis. It has enabled them to identify an adverse situation as a potential crisis. Additionally, destigmatization of crisis has also encouraged companies to acknowledge that they have been hit by one.

The report also stresses the diversity of crisis and how it can baffle corporate leaders. For instance, a natural disaster may not disrupt the daily functioning of an IT firm. On the other hand, it could cause significant damage to a travel company or a manufacturing unit.

PwC identified 19 possible crisis triggers and divided them into 7 categories as follows: 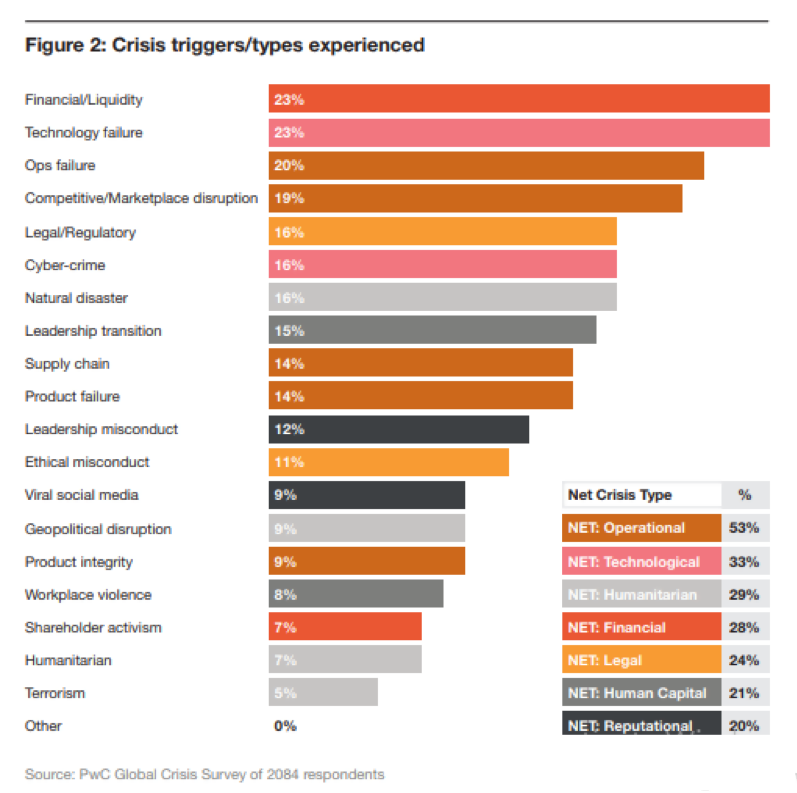 Companies with over 5,000 employees are prone to crises related to cybercrime, natural disasters, leadership, and ethical misconduct.

It is also important to point out that the most catastrophic crises aren’t often the most newsworthy ones. Crises related to ethical misconduct, cybercrime, and marketplace disruption often steal the limelight in mainstream media. However, the respondents rated financial/liquidity issues, technological disruption, and operational failure as the top three most disastrous crises. 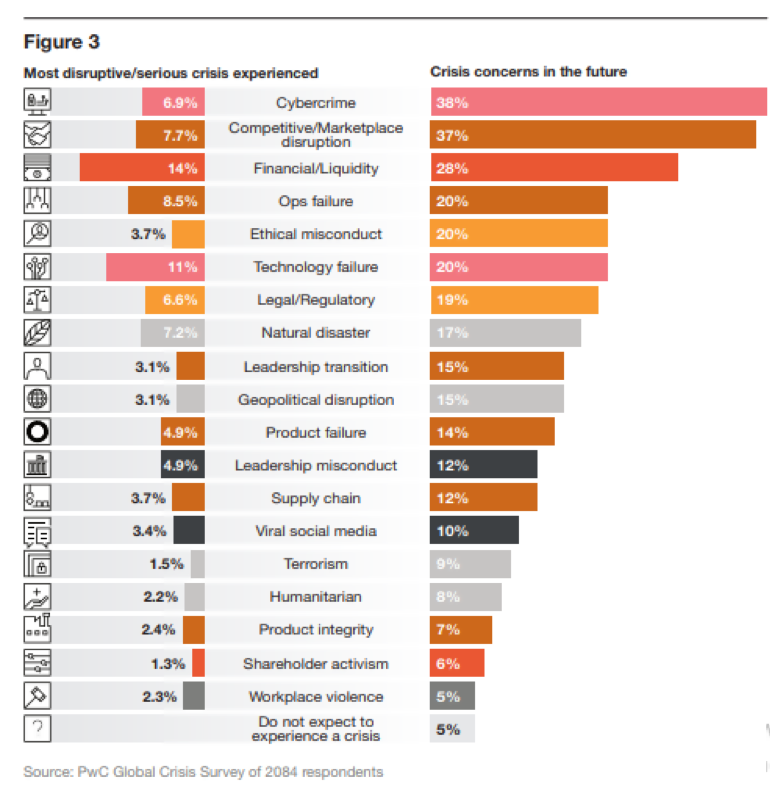 3. The Proliferation of Crisis

When a crisis hits, it can cripple multiple wings of a company. The shock waves penetrate through every organizational layer, resulting in one or more ancillary crises. Each of these ancillary crises can trigger a consequent feedback loop, affecting both internal and external stakeholders. It is about time companies recognize this chain reaction in advance and modify their crisis management strategy accordingly.

Nearly 47% of the respondents claimed to have suffered an ancillary operational crisis, irrespective of the nature of the initial crisis. Additionally, many of them faced legal and reputational issues, while marketplace disruption was another widely cited ancillary crisis.

The rippling effect of a crisis, however cataclysmic, helps companies identify organizational gaps that made them susceptible in the first place. This, in turn, enables them to better prepare for any future crisis.

A crisis often creates a skewed perception of responsibility, with board members and various departments trying to take ownership of the situation. The report also points out that C-suite employees are more likely to claim responsibility for preparedness, response, and communication than non-C-suite ones. 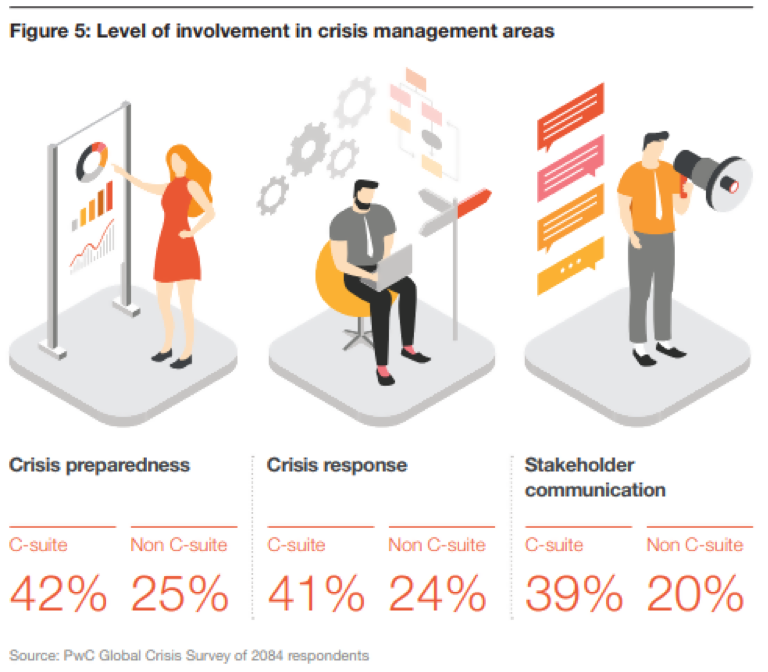 This is a positive sign indicating that top-level executives have started recognizing crisis management as an integral part of their business. However, such an overlap of roles and responsibilities can disrupt efficient communication, coordination, and decision-making, which is crucial for crisis management. For a crisis management strategy to work, you must outline clear roles and assign a competent leader.

Another crucial revelation is that at least 7 out of 10 respondents claimed to have a dedicated crisis management team. Additionally, 74% of the companies sought external help during or after their biggest crisis. These findings indicate that more companies are willing to dedicate resources and manpower for crisis management.

5. Crisis is an Opportunity

Despite the disastrous consequences of a crisis, it can be disguised as an opportunity to emerge stronger and healthier. Out of all the respondents who had experienced a crisis, 42% of them claimed to be “in a better place” post-crisis. Some companies have even experienced revenue growth after being hit by a crisis.

The report also elaborates on what these companies have done differently. Here are a few steps:

6. The Future of Crisis Management

In the age of smartphones and social media, there is no room for error in crisis management. Companies can’t afford to react slowly or repeat the same mistakes. PwC’s survey suggests that in the future, corporates will be expected to maintain complete transparency with their stakeholders. They will have to be proactive and reactive to respond quickly when faced with a crisis. Otherwise, the new-age army of “crisis connoisseurs” won’t hesitate to penalize them.

From technical glitches and operational failures to workplace violence and natural disasters - a crisis can hit an organization anytime, anywhere. PwC’s Global Crisis Survey 2019 highlights the fact that a crisis doesn’t discriminate and can affect multiple layers of an organization. It is crucial for companies to develop an agile crisis response plan and allocate a specific budget for it. It is equally important to keep your internal and external stakeholders in the loop during such critical periods.

Visionary leadership and collaborative teamwork will ensure that the plan is executed correctly in the event of a crisis. Do you agree? Share your views in the comments section below.

Also, are you prepared to handle an employee crisis? Take our quiz to know!